by Saswat Tripathy and Ayushi Bandyopadhyay

The circle of life is full of drama and struggle. Species societies run through food, reproduction, and breeding. Another important part of the cycle is socializing. In the kingdom of nature, this socializing concept is known as “ecological species association”. An integrated entity in which a species composition is observed in association with a continuous structural appearance in a particular habitat; encompassing plants, animals, and microbes. As the ecological association develops, it results in a series of positive, negative, and neutral interactions. Some of the famous examples are the prey-predator relationship between a top carnivore and herbivores, a mutual relationship between algae and fungi to give rise to lichens, competitive interaction between organisms for space and nutrients, etc.

One such fascinating association is ‘commensalism’, which is a positive relationship between two organisms where it benefits one and becomes neutral for the other. The point of attraction in this tale is the association of epiphytes with the large trees. The term epiphyte constitutes two Greek parts- epi means ‘upon’ and phyton means ‘plant’. Epiphytes are angiospermic plants that grow on trunks and stems of large trees, dominating in the tropical moist rain forests and also seen in the temperate regions of the earth. Except for a few examples like the pineapple, almost all the epiphytes have no attachment to the ground; they are commonly called “air plants”. The oddities of a small plant forming an association with a large tree without harming the host are quite evident in terms of its function with respect to the host. 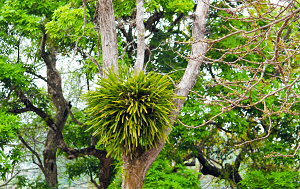 Image 1: A bromeliad on the branching junction of a tree. Image courtesy- Ayushi Bandyopadhyay

Some important epiphytic forms in nature

Different forms of epiphytes imply the bio-diverse nature of these commensals in the rainforests. The important ones are ferns, lianas, mosses, lichens, bromeliads, and orchids. Each of these epiphytic forms plays a crucial role in ecological services and also acts as an indicator of the specific ecosystem. Ferns, mosses, lichens, and orchids are well known to the general knowledge of the common man due to their abundant distribution and aesthetic beauty. Mosses, ferns, and orchids are used as common garden plants due to their role of air purifying and adding beauty to the gardenscapes.

Invasion of the canopy and commensalistic association

Epiphytes invade the tree tops in the rain forests in order to have explicit access to sunlight, away from the dense shaded tropical forest grounds. The individuals settling on the tree trunks or high in the canopy do not affect the host; rather take physical support with help of their roots, clinging to the crevices on the tree bark. The primary communities, like mosses grown on the canopy, provide the foundation for the succession of the large epiphytes like ferns, bromeliads, and orchids. After a successful invasion, epiphytes grow as per the available conditions on the canopy.

The epiphytes get benefits in the form of various adaptations for their growth and survival. The important benefits are:

· Invasion to the canopy provides ample sunlight for photosynthesis along with avoidance to predation from herbivores.

· Invasion is further facilitated by the support system of the air plants through the availability of micro soil conditions provided by the moss and algae growing on the tree bark.

· Above-ground succession reduces competition on the forest floor with other vegetation as short stature and low growth conditions are limiting factors for competition with other plants.

· Invasion to the high canopy supports seed dispersal through the wind.

· The counter strategy for intake of water in absence of root’s direct contact with soil is to absorb moisture from the rain, fog, and mist. In addition, the leaf bases are tightly structured to make a small pool to hold water.

· The leaf litter from the canopy provides essential nutrients to the epiphyte. 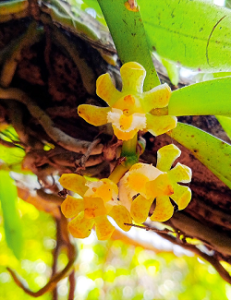 Mosses growing over the canopy create a microclimatic soil substrate that acts as the base for other large epiphytes like bromeliads, ferns, lianas, and orchids to grow upon.

The structured pool of water at the tightly packed leaf base provides habitat and a small ecosystem for small invertebrates and other small canopy creatures.

Epiphytes are like harmless innocent kids being fostered by an unrelated parent who provides them everything they need without asking for anything in return. These aerial plants grow proliferously in the rainforests due to the suitable climatic conditions the ecosystem provides for their types. In conservation biology, the umbrella species concept shadows a number of inclusive animals whose protection and conservation are achieved by protecting important species, particularly large mammals.  Conservation of the rainforests in the tropics goes hand-in-hand with that of these canopy jewels. The threat of habitat destruction from deforestation and change in land use pattern challenges their existence. Imposed plantations to reassure afforestation don’t solve the problem as epiphytes tend to be host specific. The threats of climate change and global warming are the riskiest as humidity is few of the sole requirements for the epiphytes and other plants to sustain. To witness the elusive glamour of the trees embedded with these ornamental species, legal protection, and local support and people’s participation toward a necessary conservative action are essential. To yield the beauty and importance of the epiphytic ornaments, their knowledge and functional understanding are significant to be wielded.

Saswat Tripathy is an MPhil Scholar at Central University of Odisha, Koraput.

Ayushi Bandyopadhyay is a Post Graduate student at Central University of Odisha, Koraput.