For two whole years, she had disappeared into thin air.  Not she alone.  The rest of them as well.  How they survived is anybody’s guess, with their means of livelihood suddenly grabbed from under their feet, leaving the street pavements clean, colourless, smileless, totally bare.Often, I pondered about their whereabouts.  Back to their villages eking a living from farm produce or filling hungry mouths with rice cooked in black-bottomed earthen pots, water undrained, with a pinch of salt?  Or the worst had happened …. sucked into the jaws of death, with Covid making no distinction between the old, young, rich, or poor.  Death made random choices. 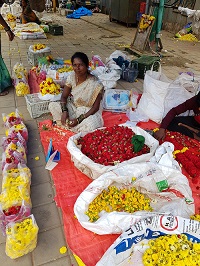 At the end of the vaccination drive, and with life returning to normal, pavement vendors got back into the business.  And there she was amongst them, in the same spot sitting under the blue tarpaulin cover with her wares kept in gunny bags and some apportioned into lots in plastic bags. Did she keep a count of the number of roses to put into each bag?  I think not.  That would be too time-consuming for street businesses dealing with perishable goods. With practice, she must have perfected the art.  Customers were free to make their choice.  Depended on the luck of the draw, as there was no weighing scale in sight to prove the point.  Charged flat rate of Rs.50 per packet for a packet of roses disregarding economic status or the type or make of vehicles that stopped at the curbside.  At times the ladies remained in their Jaguars, Bentleys, Mercedes and SUVs, relegating the task to their uniformed drivers to pick up packets of flowers.  Unimpressed… remained firm in her pricing policy and buyer/seller interaction.Before Covid, I had asked what she did with the unsold flowers at the end of the day.  ‘Oh!  That is not a problem.  I throw them on unoccupied land where cattle are taken to graze.  They eat the marigolds and roses.  Very palatable and nutritious cattle feed” she asserted.  My suspicious mind wasn’t convinced. I had heard of flower bouquets being picked up from grave sites, recycled and resold. I reasoned myself, hers were loose flowers hand-picked with short stems, no stems, and no thorns in the roses. She wouldn’t lie knowing the flowers were bought solely for offering to the Gods. Where else could the flowers be used? 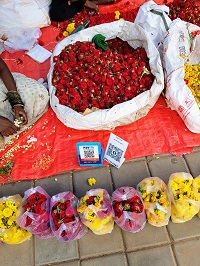 I was thrilled to see her pitch up shop once again.  The familiar smile was back, exposing pan-stained teeth, and multitasking…talking, stitching garlands, packing flower packets, popping a pan (betel leaf) into her mouth even before the last one was finished.  Next to her sat a young boy and an elderly grizzled man, whom I assumed were her son and husband.  I asked if all was well during the two years of no business.  Neither was she conversant in Hindi nor I in Kannada, but we managed to communicate by picking up words common to both languages.  What I understood was that she and her family had survived on rations given by the government under the Garib Kalyan Anna Yojana, supplemented with farm produce from the land she owned.  No bitterness, no complaints.  The smile said it all.  “It was God’s will that my aged parents did not survive” she shared her loss in a stoical tone.  That made me sit up. There was one with ‘nothing’ grateful for whatever came her way.  In contrast were those with everything, cribbing at the unfairness of it all, enjoying the privileges of online ordering and home deliveries of essential items, and Netflix for entertainment. My admiration for her grew by leaps and bounds.  And when she said “Nīvu manage nanna tāyiyannu nenapisuttīri translated as…You remind me of my mother… It was music to my ears. It brought me to tears.She knew me by face and from the way, I took time to get out of the car, twisting my body to face the door, right leg out followed by the left leg, steadying myself before climbing onto the raised pavement.  And of course, the only oldie to request to throw in some extra marigolds into the rose packets…amusing her with the senior citizen card which I played quite often. Parvati never denied me those extras right in front of the noses of other customers.  They too smiled, indulging an old woman, too old, to be denied her right and played along remarking “She deserves the ‘extras’ for Parvati’s ears.  Not that Parvati needed any prodding from them.  Sometimes I get blown away by her thoughtfulness.  Even before I can unclasp the seat belt, she is at the window with the packet of red roses topped up with yellow marigolds, chrysanthemums, and occasionally garlands, bringing along her QR scanner to make payment, saving me the trouble of moving out of the car and digging into my handbag for cash.  If she’s busy with another customer, she sends her son with the flower bag.  A straggly young boy of around fifteen who should have been in school.  Instead, joining the family business.  He spoke English and Hindi, so I assume he must have received an education when younger.The amicable way business is conducted on the pavements astounds me. Like Parvati, many flower sellers sit side by side, occupying the same pavement and sharing the same tarpaulin roof over their heads.  There is no ill feeling among them if one has all the customers, bypassing the others.  A tacit understanding between them is never to poach on another’s customer.  And no price undercutting to draw away customers.  Fair business, with mutually agreed boundaries drawn on business practicesThat is Bangalore… the tech city, the cashless city, where one can leave their purses behind and not have to worry about making payments.  The footpath ‘chaiwallah’ too has a QR scanner to make payment for a cup of tea costing Rs.10/-.  I’m not sure if other cities conduct business likewise!  And further wonder why those holding positions of power cannot play fair in their professions.

Snigdha Agrawal (nee Banerjee) is a Bengali born, raised, and educated in a cosmopolitan environment, with exposure to the eastern and western cultures, imbibing the best of both worlds.  With more than two decades of experience working in the corporate sector, her outlook on life is balanced, which reflects in her writings. A versatile writer, she writes all genres of poetry, prose, short stories, travelogues, and hotel/restaurant reviews on Tripadvisor.  She is a published author of three books.  An intrepid traveler, her travel diaries can be accessed in word press blog: randomramblings52.  She lives in Bangalore (Karnataka), India.