“HOW WILL YOU BE REMEMBERED?” The “living legacy” of the Shorts’ reads – “Our objective was sharing the beauty of the place with as many people as possible.”

A fascinating place,  hidden in the precincts of the city – The Bellevue Botanical Garden. People who have had the good fortune of visiting this vast space are definite to share their own stories of admiration and astonishment.

The question ‘How will you be remembered?’ continues to haunt my thoughts. Each of us wants to leave behind our legacy in a certain way. We want to be known as wealthy, wise, prolific, intellectual, amicable, adroit, generous, affectionate, caring, altruistic, philanthropic…..all rolled into one! All of which is packed within the three-pound adult human brain. And at birth, it was less than a pound. 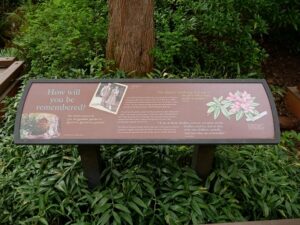 In order to acquire the badges of wealth, wise or otherwise, what does one do in one’s lifetime apart from acquiring the mandatory education that leads to a rewarding profession; which in turn provides food, clothing, and shelter (a comfortable one at that!). Education and career with their concomitant stress in an ever-increasing competitive world often leave us gasping for breath; running the rat race leaves us messed up and stressed as the wants are never-ending. The vast majority are victims of the proverbial ‘seven jars of gold.’

Amidst this materialistically inclined worldly-wise group, there are quite a few who wish to ‘give back to the society’ in some way or the other. How do they acquire such minds? Are such values imbibed from their families or Society? –perhaps, both!  As Peter Buffett, the award-winning musician son of business magnate and philanthropist states – his father Warren Buffett did not let him ‘take the easy way out,’ and although he had ‘little financial support’ from his parents, he had ‘plenty of emotional support.’

There is greater joy in caring and sharing. All religions from times immemorial have highlighted the significance of altruism.  It would be appropriate to share an anecdote about Saint Rahim, whose dohas, I have studied at school.

Once, Saint Tulsidas came to know about the extraordinary behavior of Saint Rahim – while giving alms, his gaze lay downwards towards the earth. When Tulsidas questioned him about the ‘unique way of giving’ in this couplet:

Saint Rahim replied that the ‘Giver’ was someone else (God), I lower my eyes in embarrassment because of the world’s misconception that I am the giver.“देनहार कोई और है, भेजत जो दिन रैन

To what extent one can be altruistic varies according to one’s mind and means; however, one thing to be definitely understood is that when one gives, there is greater gratification than hoarding.  After all, one has to leave everything behind when one exits earthly existence, just as Alexander the Great recognized and pronounced just before his death: “After my death when you put my body in the casket, let my arms hang over the edges with my palms wide open, so the public can see my empty hands while I am leaving the world.”

Furthermore, as Swami Vivekananda emphasizes: “It is our privilege to be allowed to be charitable, for only so can we grow…  The poor man suffers that we may be helped; let the giver kneel down and give thanks, let the receiver stand up and permit.”

How do we wish to be remembered? – The choice is ours, and ours alone.

Hema Ravi is a freelance trainer for IELTS and Communicative English.  Her poetic publications include haiku, tanka, free verse, and metrical verses.  Her write-ups have been published in the Hindu, New Indian Express, Femina, Woman’s Era,  and several online and print journals; a few haiku and form poems have been prize winners.  She has contributed to the ‘Destine Literare’ (Canada). Besides,  she is the author of ‘Everyday English,’ ‘Write Right Handwriting Series1,2,3,’ co-author of  Sing Along Indian Rhymes’ and ‘Everyday Hindi.’  Her “Everyday English with Hema,” a series of English lessons are  broadcast by the Kalpakkam Community Radio. She is the Secretary of the Chennai Poets’ Circle.