He comes at dusk, wearing a yellow and black checked shirt with sleeves rolled up, black pants, bare feet with a sickle in his hand.  Sometimes riding a much-used bicycle, other times on foot, to cut the overgrown grass.  Frail of built, but agile, it’s hard to guess his age from his overall appearance.  I would pin it somewhere between thirty to forty, because of those frown lines etched on his forehead, whenever he looks up.
Switch…switch…switch goes the sickle blade.  How does he manage to cut the grass of equal length?  He has no measuring tape.  Yet when stacked in bundles, not a blade is out of place. Packs them tight into big bundles, and carries them on his head, or behind the seat of his wobbly cycle.
In between takes a break.  Sits on his haunches, lights up a ‘biri’ (cheap hand-rolled cigarette) takes a few drags, and saves the rest for the next break. I try hard to read the expression on his weathered face.  None. More blank than a blank white page. 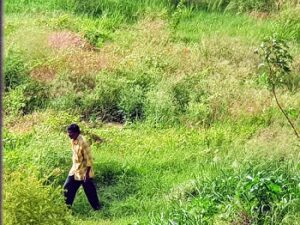 A deluge of thoughts runs through the mind.  My curiosity knows no bounds.  I wonder what could be his life like?  Many theories arise.  Maybe he sells the grass as fodder to cattle owners in exchange for a small price.  Certainly not enough to feed his wife and six children, living in a slum, outside the city limits.  Only wage earner.
I could be grossly wrong.  Clothes and looks do not denote a man’s financial status.  He could be owning a few milking cows and a home of his own.  Arrives in his working clothes every evening, to collect the grass to feed the bovine mouths that bring him returns.  Collects milk and sells it to households in the neighbourhood, to those who prefer fresh milk over tetra packs.    Wonder, if like other milkmen, he adds water to the milk to increase its volume.  Maybe not.  One of those principled types.
Another scenario pops up.  His body language suggests he’s a paid labourer.  Perhaps asked by the landowner to keep his property in ship shape order, and protect it from trespassers and land sharks, on the prowl to claim unattended plots of land.  With the money earned, gets drunk, stumbling into bed beside his wife.  She is wild. Angered by his apathy and concern for those little ones he fathered, going hungry to bed every night, while the toper snores under the influence of country liquor. 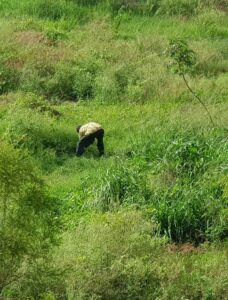 Nah! Can’t be.  He seems like one who is foot lose fancy-free. No strings attached to any family.  Maybe brought up in an orphanage, and left to fend for himself when reaching eighteen.  Did he pass high school?  How stupid of me to even think he ever attended school.  Or, did he fall out of school not interested in learning history, geography, literature, or maths.  More a ‘hands on’ man doing odd jobs to make ends meet. A hand to mouth existence his preference.  Or a wanderlust like me, a roaming…roaming…to places unseen.
And then it strikes me, that he could as well be an IT professional who lost his job during the pandemic.  Got Covid, which explains the frailness of his body.  The company he worked for went bust and closed down. No compensation was ever paid to the employees. Inspired by Narayan Murthy who started Infosys, the guy decided to become an entrepreneur, selling milk and getting rich, knowing well there would be many takers for fresh milk. For sure he possesses business acumen. Though his demeanour suggests he’s one of those who likes to take life easy. And so, what?  Nothing wrong in that, mentally I argue, in his defence.
One last thought I share with hubby “you know what.
he could be the ghost of Mr. Reddy, buried in the same plot”.  The black tombstone rising above the tall grass, is visible from our third-floor balcony. Going on to add…” why not? He is fiercely possessive and protective of his plot. Tries his best to keep the place clean, in the absence of his folks long since left for greener pastures in the west, without leaving an encumbrance certificate”.
“You guessed right” hubby says in a jocular mood.  That last thought gives me gooseflesh.  What if Late Mr. Reddy jumps over the wall boundary, knocks on my door, and requests to share a cup of coffee, my hubby and I usually drink on the balcony, surrounded by birdsong, when the sun is setting?!
This guessing game of the grass cutter’s life is like I’m playing ‘snakes and ladders. The number on the dice determines if he’s a winner or swallowed by the snake to hit the bottom of the rung of the ladder.
“Let’s get inside before the army of mosquitos arrives,” says hubby, putting a brake on my ramblings; closing the French windows. Thus cutting off my view of the grass cutter at his workstation counting blades of grass!

Snigdha Agrawal is a published author of two books of poetry and has contributed to several anthologies. Her writings include all genres of poetry, prose, short stories, travelogues, restaurant reviews, and book reviews.  She is widely traveled and shares her travel experiences in her blog : randomramblings52.wordpress.com.  She lives with her husband in Bangalore, India.