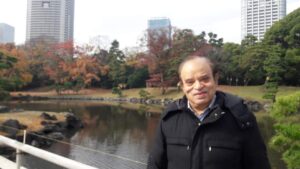 Deepak Bisaria is an internationally renowned astrology teacher and researcher. He has been on the teaching faculty of the Institute of Astrology of Bharatiya Vidya Bhavan New Delhi, since 1997. Also, he writes the monthly newsletter of journalofastrology.com. Deepak Bisaria has very strong predictive instincts. He often travels to Japan, Russia, Taiwan, Singapore, and the Philippines for taking astrology classes.

During his wide-ranging research under K N Rao in 1995-97, Deepak Bisaria wrote detailed Astro-sketches on Dr.Rajendra Prasad and Ram Krishan Dalmia. This helped him attain instant recognition in the astrology community. He has written several articles and contributed to several group research projects too. His book, Indian Marriage in Modern Urban Educated Society, is regarded as a path-breaking exploration of marital astrology. Deepak Bisaria belongs to the new group of research-oriented and technically qualified astrologers. He believes that Vedic knowledge helps to access unexplored areas of science.

Following are his response to our questions

I come from a non-astrological background. I was born and brought up in Delhi. My father was in the government service, so I lived and studied in different places in India. I did sales and marketing as my day job and started studying Astrology as an interest in 1992. Later on, I studied in Bharatiya Vidya Bhawan (BVB) for two years and did research under the legendary astrologer Mr. K.N. Rao for two years. In 1997, I started teaching there as faculty. Though I retired last year as General Manager of Reliance Industries Ltd. after 17 years of service, I kept teaching, researching and advising at BVB Delhi in the field of Astrology. So far, I have written various research papers in this field and have also visited and taught in many countries, such as Russia, Japan, Philippines and Singapore. Currently, I am in the prediction panel of JournalofAstrology.com and have editorial responsibilities of BVB research journal.

2.       Why did you choose to become an Astrologer? Do you see Astrology as a career field or an academic study?

I studied Astrology as an academic interest. Some are exposed to Astrology due to family traditions. Some want to make money out of it, some study it for spiritual knowledge and advancement and some are just curious. I was in the curious category. I wanted to know if there is truth in this field of knowledge and if someone can actually predict the future after studying it. And I have observed that Astrology is a vast field with different branches and one cannot even study one-tenth of this sphere of knowledge in one lifetime. My teacher, Mr. K.N. Rao, a renowned astrologer, has done great research in this field. He studied old manuscripts,

Shastras and books made great contributions in this field. I am lucky to have a teacher like him. Astrology has seen a lot of corruption in recent times due to people’s greed and misuse. A lot has to be done to make people aware of it.

3.      Why do you think people in our country put so much faith in Astrology? What relevance does it have?

People in our country have faith in Astrology because predictions do work, and Indian astrology has a great success rate. In my thirty years of experience, I have seen thousands of predictions coming true on a daily basis. This field is 25,000 years old and reached its peak during the reign of King Vikramaditya under his court astrologer Varahamihira. In Communist countries, this art was suppressed, but due to the spiritual and Vedic heritage of India, Astrology found a fertile land for research and knowledge expansion. That is why Indian astrology is so advanced, it gives correct predictions. Even during invasion from outsiders, this knowledge was preserved, though it became very limited to certain communities, but it prevailed and is thriving in current times.

4.      Do you think Astrology can be validated scientifically? What does your experience say?

Yes, it can be validated, because so many correct predictions are made. If they were incorrect, then why would people have so much trust in it? Astrology is a super science and Vedic Astrology is a representation of this super science that connects this world to higher spiritual worlds.

No, not at all! On the contrary, it reinforces the concept of Karma. The birth time and chart is a representation of past life karmas. What we do in this life from our free will decides our future lives and future in this life as well. Generally speaking, if 75% of a man’s life is pre-destined, 25% of flexibility is there, which represents our free will. For example, one may find himself in a situation where he has a power to kill or forgive someone. What that person chooses decides his future. Good Karma increases our good luck and fortune and bad Karma brings negative effects. Geeta preaches that a man should never abandon doing his Karma. That is why Astrology is just a summary of a man’s past Karmas, and yet there is room for free will.

6.       Is the astrological prediction of a person’s life fixed based on his or her birth chart or do you think it can be changed?

As I said, 25% is flexible based on Karmas, for example age, which in general is fixed but can be increased or decreased based on Karmas. But bigger events, relationships, etc. are fixed in life. For example, if one ties a rope around a cow, then the cow cannot go beyond the length of the rope, but it can roam freely in its periphery. That is how one can understand destiny.

7.       Some people argue that Astrology makes people fatalist, it gives people false hope or fear, what are your thoughts on that?

Yes, I agree, this is a sort of side-effect of Astrology. I don’t deny it. Many people out of greed have created false fears in people’s minds to extract money out of them. Astrology is a perfect science, but people are not perfect, and they try to satisfy their greed and vested interest through Astrology. This should not be used to confuse and create false fears in people.

8.       There are a lot of superstitions around Astrology, for example, some people insist too much on matching horoscopes before marriage in India or if there is a bad planetary combination in their charts, people tend to spend a lot of money on poojas or gems, etc. How do you see all this?

For sensitive topics like marriage, even non-believers start believing in Astrology. Astrology consultation gives faith and confidence in these matters. 75% of destiny is fixed in a general sense, which is why it makes sense that people for mental satisfaction take guidance, but many people have made a commercial industry out of it, which in a sense goes against the ethos of our cultural heritage. People should not consult astrologers every other day. It will not make any difference, because time and planets are in constant motion. If one has to follow it dedicatedly every day, then one should self-study it.

9.       Many cultures around the world don’t believe in Astrology, and yet people seem to do just fine in their everyday life. Do you think we as a society give too much importance to astrology in everyday life?

Every civilization, be it Greek, Russian or Chinese, has astrology, but it got lost with either time or government suppression, but astrology is hard to suppress. Even not believing in Astrology is a destiny, everyone should be respected. If someone wants to follow astrology, it is fine, but if someone does not want to follow it, that is fine too.

10.    Why should someone study Astrology? Should it be money, spirituality, science, or something else?

Knowledge has no limit. Spiritual knowledge is something that should be aimed for in this life. Because astrology connects the physical with spiritual world, it should be studied. Astrology helps in this quest; it can be directly tested in real life. Personal greed and money-making should not be the motivation.

11.    There is a whole industry that has developed around Astrology, for example expensive rituals that people do to pacify bad planets, or costly gems that people purchase thinking that those stones will bring good luck, what do you think about that?

Through various mediums such as social media, we are trying to make people aware about Astrology, so that they do not get entrapped by charlatans. We want to make people aware about different aspects of Astrology. Our institution has done significant contributions in this field and through our efforts over the years, we have published over 40 books, numerous research articles and at any given time we usually have around 1200 students enrolled in Bharatiya Vidya Bhawan. We have dedicated batches for research and we are striving to give Indian Astrology its true recognition.

12.    What are some general remedies in your opinion that people should do to improve their spiritual and material well-being?

We suggest mantras for remedy. General, sattvic, harmless mantras such as Ram Naam japa, chanting of Hanuman Chalisa, Gayatri Mantra, Vishnu Sahatranaam, etc. are positive mantras, which anyone can chant and practice. There are other mantras which have very specific functions such as healing or strength. We do not recommend gems as they have both positive and negative effects and their overall effect is debatable.

We should be aware about our cultural heritage. Life has given us a chance to attain spiritual heights. We should make an effort to study our heritage.