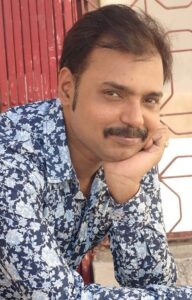 Ajay Sharma is a graduate from the Faculty of Fine Arts, MSU, Baroda, and completed his post-graduation from the same institution. He is a recipient of the National scholarship and Lalit Kala scholarship in painting in 1996 and 2000 respectively. Sharma has won several awards including the Vadodara City award in 2017. He has exhibited widely including at The Other Cinema in Piccadilly Circus, London. Drawing inspiration from current events, socio-political issues and environmental concerns, his works weave in elements of subversion in an often flat, colourful picture plane.

Following are his responses to our questions

Ans. I was born in a small town Kharagpur in West Bengal. Kharagpur is well known for the first IIT that was established in 1950. Once Kharagpur boasted of having the longest railway platform in the world. Now according to a survey it holds the third position. During his early days in 2001 M S Dhoni worked as a ticket collector at railways in Kharagpur as well! My father served at the Electrical Engineering Dept. at IIT there. I grew up in the IIT campus studying at Kendriya Vidyalaya till my 12th standard. During those days every parent in our campus had a dream that their children get admission at IIT. However from my childhood, I had an inclination towards the arts like painting, dance & music, theatre as well as cinema and as I started growing these forms of art became an integral part of me. After finishing my 12th I joined the Painting dept. as a student at the Faculty of Fine Arts, M S University, Baroda in 1991 and studied there till 1997 completing my masters. After that I have been showing my works in various art shows, teaching art intermittently. Presently I am faculty at Parul Institute of Fine Arts, Parul University. I haven’t left Baroda since 1991 though after finishing my masters I was in Ahmedabad at the Kanoria Centre for Arts to continue my art practice for about a year and in 2004 I travelled to the UK for a few months visiting London and seeing a lot of international art and culture. I am fortunate enough to have studied at the Fine Arts College in MSU that has given me an opportunity to be in association with the stalwarts of modern Indian art and the Narrative school of art like K.G. Subramanyan, Jyoti Bhatt, Bhupen Khakhar, Gulam Mohammed Sheikh, Nilima Sheikh, Rekha Rodwittiya, Surendran Nair and many others. The late Maharaja Shri Ranjitsinh Gaekwad was also a close friend of ours as he had also studied at Fine arts college during the time when we studied there. He was equally passionate about art and music and I interacted with him on both of these. Apart from art I am also very passionate about music. I am a keen listener of music especially of Hindustani classical and old songs, both film and non-film from the golden era. Language has never been a barrier for me for appreciating a good musical piece be it in Malayalam, Assamese or French! Though I am not a perfect singer, this passion for music motivated me to learn Hindustani vocal for a couple of years. I have also performed in children’s group songs at All India Radio, Kolkata during my school days as I was part of the group formed by my music teacher at school and we would regularly perform at various functions. She would take us to All India Radio, Kolkata & Aakashvani Bhavan, New Delhi for children’s music competitions as well. Being in Baroda I have been fortunate enough to listen to free live consorts of the stalwarts of music ranging from Bhimsen Joshi, Pt. Jasraj, Gangubai Hangal, Kishori Amonkar, Shubha Mudgal, Pt. Ajoy Chakraborty, Kaushiki Chakraborty to Rashid Khan and many others since 1991. Still now I take out time from my busy schedule to attend such concerts. Learning music formally came late in life. My first formal teacher was Vanita Thakkar in Baroda. Then I learnt for a short period from Madhavi Saptarshi as well. Later I joined the Aalap school of Music at Gorwa in Baroda where my gurus were Shri Manhar Sanghavi & Late Smt. Divya Sanghavi. There I continued till 5th year and with just one more year left to complete Visharad, I had to discontinue because of long distance and time constraints. Now after a gap of ten years I have started my riyaaz again singing with my little daughter Tiana who is just five years old. It gives me immense pleasure to have been able to begin my singing again, which has been possible only because of my daughter who is showing considerable interest in it!

Why did you choose painting and arts as a career field?

Ans.  As mentioned earlier, I was interested in art since my childhood, I thought I could make a career out of something that I am passionate about and enjoy doing. I had private art tutors at a tender age in my home town Kharagpur who introduced me to the nuances of art. Later when I was in my 10th standard I became more serious about art and decided to make it my career.

What are some of the themes, topics that you like capturing in your works, and why?

Ans.  My works involve a subjective way of looking at my surroundings and deciphering the meaning from a myriad of images, which are part and parcel of my life as well as the visual culture around me. I draw my artistic inspiration from the reality around me, where news, literature, poetry, and cinema give direction to my artistic endeavor. I realize that the larger global cultures; socio-political conflicts, acts of violence, urbanization, and urban life, environmental issues, all collectively impact and influence individual destinies. I try to weave in an element of subversion in my otherwise colorful and often flat picture plane. I would like my works to reflect the time they are made in and to some extent be my subjective voice. If I look back, the consciousness of time in which I live has always been an important component of my work although I have shifted gears in terms of method, medium, scale, and imagery.

In my works, iconic images of history, as well as everyday banalities, become part of the canvas landscape. Terror and violence as well as urban life contrast with the lack of wildlife. Urban dreams and materialistic desires take the front seat here. With this begins the toil and stress of the urban man which becomes an everyday affair to fulfill his towering demands and comforts, most of which is imposed on him by his surroundings. In many of my works, the image of a money plant becomes a metaphor for wealth and prosperity, while the greed and hunger of the urban man get trapped into a labyrinth of imposed benchmarks of a comfortable life set by the urban culture itself.

What were some of the challenges that you faced in your career as an artist?

Ans. My challenges of being in the art field have been many and most importantly is the challenge of managing my finances. Even after practicing and being in the field for more than 20 years, I still have no support system from any gallerist, curators, art collectors, critics or historians. My art practice has been ignored by people ruling the contemporary art world almost completely. My artworks have hardly sold over the past 20 years, as a result, to manage my finances I had to take up teaching jobs that never suited my temperament. I am still waiting for some galleries that can represent me as their artist.

In your opinion, why do arts not get its due encouragement in our country and what should we do to change that?

Ans.  I think for the majority of the common masses if you can make a portrait of someone that matches 100% with the person, then you are the ultimate artist. For the common people if you can draw and paint something exactly the way it is or if you can paint a beautiful scenery of sunrise or sunset, waterfall, mountains etc. then you are a really great artist. But these are just some preliminary notions on art. They are just some basic skills. Real art is something beyond all these skills. It’s about innovation, perception……how one looks at this visible world, and how one transforms all that they see into the language of art. With time art has undergone a lot of changes and new innovations. The way we have seen changes in the field of science, technology & medicine, in the same way, art also has gone through changes. If this is understood then automatically it will be encouraged by all. Also from the school level, students should be taken to art shows of contemporary artists in local cities and bring some kind of awareness.

Many artists face scrutiny or censorship because their work is sometimes deemed controversial, what are your thoughts on that?

Ans.   It’s very unfortunate that artists face censorship because of their work. I think that most of the time the content and intention behind such works is completely misunderstood and misinterpreted. So it is best to talk to such artists and understand their work before attacking them or their artwork.

What should be done to promote and preserve Indian artistic heritage in your opinion?

Ans.  There should be more heritage walk programs for the common masses in every city in our country. Also, the task of educating people about Indian art and heritage should be given to scholars and authentic people like Late. Kapila Vatsayan and Romila Thaper for educating the masses about the richness of Indian heritage and culture rather than giving this responsibility to some art-culture & heritage minister who is completely uneducated and ignorant about such things.

What would be your advice for young aspiring artists?

Ans.   For a handful of art students, it may be very easy and simple to become an artist within a very short span of time and get all the privileges and benefits of being an artist. But for the majority of those who aspire to become artists, it may be the most difficult thing to achieve on this earth! They may spend their whole lifetime greying their hair but may not achieve even ten percent of what they deserve and desire. So they should be prepared for facing this bitter truth as well. Nevertheless, persistence, patience, and hard work may pay in the long run, but there is no certainty at all.

What are your plans for the future?

Ans. To continue working as much as possible and venture into areas in art I haven’t explored till now. Also in spite of all odds, keep motivating myself to perform better and keep running my one-man show where most of the art world will be on their toes to ignore my voices!

Ans. Here I want to quote what Winston Churchill had said once – “Success is not final, failure is not fatal: it is the courage to continue that counts.”