‘Be still’ said the old gardener to the handful of seeds.  “Your life is at the mercy of the elements.  Be not misled by the Fair & Lovely Billboards promising lighter skin, in a matter of weeks. It’s all humbug!”

The seeds pondered over the old man’s advice and lay quietly in their bed of soil, in the funereal mood. Weeks went by, they still didn’t see the face of the sun.  Losing patience decided to jump the gun, breaking free from its tightly pulled bedcover, pushing out little at a time. 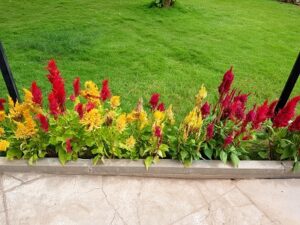 The sun smiled, the rain fell, the wind whistled in admiration, as would a street lad to pretty lasses.  Encouraged the seeds flourished, blossomed, inviting more and more stares from the masses.

Seeds sprouted into blossoms, watching life moving on. An endless stream of swiftly moving time.  Nothing escapes its eyes. Shadows draw nearer and blackness surrounds, and nothing but terror and evil abound. Corruption all around.

The other day saw through the glass panes, a couple seated in Starbucks in animated conversation.  Something seemed amiss.  The lady snatched her hand away from the gentleman’s grip.  Stormed out of the cafe looking anguished.  Now what could have angered her, thought the blossoms…maybe a lover’s tiff or end of a relationship.  Who knows, could be the man reneged on his promise of marriage for lame reasons.  Some just fake love to taste fruits forbidden.  Once eaten, desirability ceases.  Exactly what self-absorbed people do and then wonder, why relationships fail.

Oh! These homosapiens warring over inane misunderstandings; those holding power and position quick to intimidate those who do not bend, fawn, and beg.  What is wrong with them?  Don’t they get it? Someday stripped of it,  persona non grata is their status.  Ironic isn’t it?

On the other hand, look at Jasper the golden retriever from the 5th-floor apartment…he has no qualms of lifting his leg and peeing all over me, killing my senses.  Now, what can you say to an animal following animal instincts?  After all, he has only a dog brain, unlike the two-legged humans.  Jasper doesn’t upset me as much as them, even though at times he chews up my petals.

The other day, a flock of sparrows held a conference on the lawn behind my bed of blossoms.  They felt exceedingly slighted by the larger of the avians, outmaneuvered in speed racing across the heavens.  But hold on…there is no foul play, no greasing of palms to win the race, as happens on cricket pitches, politics, and sports ‘unseparated’!

And all know it, but choose to remain ignorant.  Winning and losing are fixed before games.

In the distant galaxies, they who witness the push and pull of greed, laugh aloud, resounding in echoes. But they don’t reach ears,  shut tight with iron shutters.  Rolls up magically to the beating of drums, drumming praises, or whenever put on pedestals, garlanded, serenaded.  Exasperating!

Did the gardener risk muddying his hands?   He had been warned of unpredictable caprices of underground species.  He had heard ‘It’s a dirty game’ but that was about Politics. Here the dirt stuck beneath his fingernails, washed off, restored cleanliness. And the reward of colours from those pale brown seeds, more than compensates for digging his hands into the mess.

He tends to the blossoms as would a mother to her child.  Pulls out the weeds to allow penetration of sunlight.  He wonders why these men and women don’t take time to weed out evil from their minds. He adds mulch to the soil to ensure the better growth of his plants.  Why can’t they do likewise?  They require to fertilize their minds and sow seeds of goodwill.

Snigdha Agrawal is a published author of two books of poetry and has contributed to several anthologies. Her writings include all genres of poetry, prose, short stories, travelogues, restaurant reviews, and book reviews.  She is widely traveled and shares her travel experiences in her blog : randomramblings52.wordpress.com.  She lives with her husband in Bangalore, India.