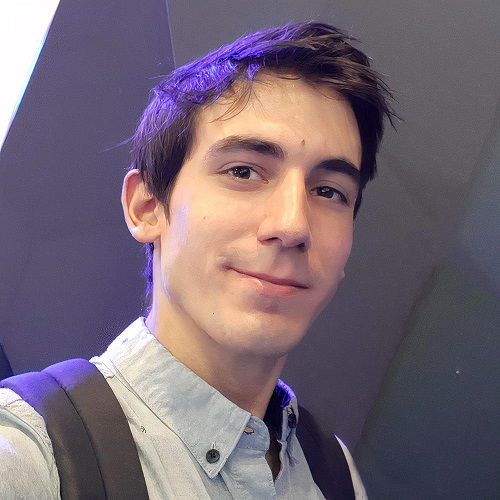 Colin Verdier is a young entrepreneur and web and mobile developer, founder of Vayland, an app development company dedicated to entertainment. After launching his first application in 2019, Tinkovu, an app dedicated to long-distance relationships, which totaled more than 1,500,000 downloads worldwide, he is embarking on a new challenge with Picto, an app that allows you to exchange drawings that are drawn in real-time when you receive them.

Following are his responses to our questions

I am a 23-year-old developer who has just finished his studies in web and mobile development. For 2 years I have been studying interface and user experience design.

I live in France, in Paris where I grew up, and where I work today.

Two years ago I launched an application called Tinkovu which helps loved ones deal with long-distance relationships. The application has more than 1,500,000 downloads which allowed me to create my own company, Vayland, which today continues its adventure with the launch of Picto, a drawing application for the general public that allows you to send your creations to your friends. When the drawing is read, we see it drawn in real-time with visual effects, sounds, and even music.

I’ve always been interested in the idea of creating your own software. Whether it’s in the form of games, apps or websites. I really like this idea that you can start from a completely empty screen and you have to create everything: how the universe works, what are the rules, and the limits. Everything has to be built and it’s something I particularly like in the sense that you have a huge feeling of freedom and I have always been a creative person. What could be better than a blank page to blossom?

So when I was a kid I used to develop tiny games that I shared with my friends. It was quite fun I think, but it was not out of the private sphere! One day I developed a game that I shared online and for the first time, I was exposed to criticism from users. It was quite a traumatic experience to be honest, but at the same time rewarding. You have to be confronted with users’ opinions to build an interface that works!

As I always had this appetite for development, I went to study the internet business, with a lot of web development in particular. I was able to improve myself in the technical aspect of programming. Finally, I finished my studies by learning experience and user interface, to have a good basis in the architecture of an app.

However, it’s not the studies that really trained me, it’s mostly the personal projects I’ve developed that allowed me to understand why things work in a certain way and not in another. I learned much more and faster in the field than at school, it’s obvious.

At the beginning, Tinkovu was an application for my own couple. The idea was not to propose a public version but to help me to support the distance with my partner. That’s pretty selfish when you think about it! I wanted to find a way to tell my partner that I was thinking about him with a simple glance. I figured a notification on the phone screen would be perfect: Tinkovu was born, all I had to do was create a nice interface to make the experience enjoyable and I was done!

After that, I realized the potential of this app, and I started to work on the big things! My goal was to bring all the couples around the world closer together, to put smiles on the faces of those who can’t see each other because they live far away from each other. I have greatly improved the user experience to make it as accessible as possible.

I think the hardest part about being an entrepreneur is getting over the judgment of others. Many people around you will tell you that your idea is not worth the cost. That it’s better to find a job with a good salary. I think you have to choose between a comfortable salary and being proud of the work you do. Today I am proud of what I have created, I am proud of Tinkovu but also of the last born Picto for whom I wish the best!

Of course, before starting, you need to have a good idea and be sure of your idea. The most difficult thing is not to convince yourself that an idea is the right one, but to convince others. Finally, there are technical difficulties in relation to the realization of this idea. I have the chance to work in the web where you can do mostly everything by yourself. Things are more complicated when it comes to creating a physical product for example. Becoming an entrepreneur is not about opening a dropshipping store and swindling people with false advertising. Becoming an entrepreneur is about selling and showcasing your talent.

I also think that the most complicated thing is to make your project known once it is developed. We often have this idea and this impression that it is easy to break through on the web but it is unfortunately not the reality. American success stories do not exist, they are often romanticized and far from reality. You have to fight to stand out from the crowd, spend your time saying that your project is better than the others. This is something I still have a hard time understanding today.

I obviously think it is essential for companies to take into account the opinion of their users regarding the use of personal data. It’s not like in the early 2000s when nobody knew what was at stake behind personal data, today everybody knows what it is. Users are more reluctant to create an account, to leave traces everywhere on the internet. This is a real issue that cannot be neglected anymore and I think that beyond the jurisdictions, it is crucial for the company to be transparent at the risk of losing customers.

There are far too many apps today that require the creation of an account, sometimes only through authentication by Google or Facebook. Without wishing to throw any flack my way, I’ve always wanted users to have the choice not to create an account since my first apps. In fact, when you start Tinkovu or Picto for the first time, you just have to enter a nickname and … that’s it! No email address, no password, or any other personal data, just a nickname. And it works great! Of course, the user can choose to create an account to have a backup of his data in the cloud, but it is only on a voluntary basis.

I think that in the future, VR and AR technologies will be omnipresent. It’s only a matter of time, we can see today that Facebook is preparing the ground with its Meta project. Nothing is really ready yet but they are already starting to explain what reality will be like in 10 or maybe 20 years. Not satisfied with his sad reality, man will slowly migrate to an alternative and ideal reality in which he will be his own god. Is this good or bad, in reality, I don’t know, each technological gap has had its share of defamers. I think that virtual reality is just the natural extension of the evolution of media.

I also think that artificial intelligence has a lot of potential. It’s already starting to be a little bit everywhere in our lives. But I also think it will take a long time for a computer to think for itself.

Stop thinking, go for it and you’ll see! There’s no point in procrastinating for 20 years. The web allows you to go fast to develop, try, fail and try again until it works. As the Americans say, fail fast, try harder! It doesn’t mean that you have to rush your work, it means that you have to stop worrying about useless problems and not be afraid to make mistakes! The error is human.

I am passionate about Walt Disney’s life, what he did and what he created throughout his life. How he made his dreams come true. All these things fascinate me because this man really put his whole life into his passion. Disneyland is more than an amusement park, it’s the accomplishment of a lifetime. Walt was aware that his dreams were extremely expensive and yet he always managed to follow through on his ideas. He is truly an inspiring person to me. Living in Paris, I am lucky enough to be able to go to Disneyland regularly and I have to admit that every time I go there I don’t want to go home!

I would also love to teach at a university in the future. In fact, my goal is to open my own school to train in the creation of digital projects. But that’s a distant dream and by then maybe I will have found another vocation!

At the moment I’m very busy launching my new app Picto which allows you to send drawings to your friends and which animate when you receive them. I put a lot of effort into the user experience, even more than for Tinkovu. I would love to see this app become successful and see users create wonderful things! There are already a lot of beautiful things that have been published so if you want to join in, don’t hesitate, it’s on Android and iOS!

There are no mistakes, only happy accidents!