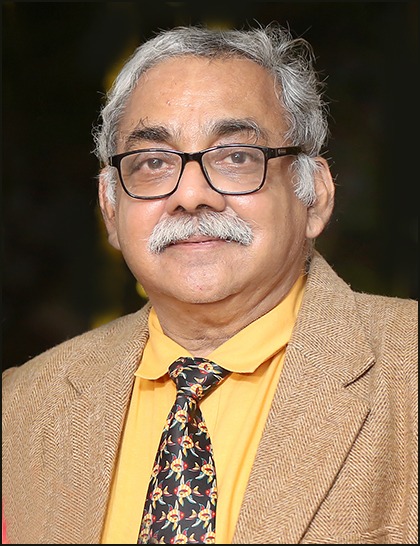 Born, 1957, Kanpur. Rajiv is a decorated poet with eight poetry volumes to his credit. Has three books of critical appreciation published on his poetic works.

Few poems are part of the syllabus of the Foundation Course in English Language, paper II of St. Aloysius College, Jabalpur (Madhya Pradesh). Dissertation has been done on his selected poems.

Select love poems have been translated in Hindi – published 2021.

Until the age of eleven, I lived with my maternal grandparents in Kanpur, while my parents were based at Agra. When I graduated to Class 7 during the year 1969, I came down to live with my parents. During this period, my mother made me read a few pages each day from books authored by Enid Blyton, one of the most popular writers of children’s books. As a young boy, I always thought that Enid Blyton was included in our school curriculum and so read the same as part of our daily homework. Later, reading books became my favourite hobby and finally the passion to read increased and during summer holidays, I began reading one novel a day and today have a personal library of over a thousand assorted books including novels. Notwithstanding, academically I am an Electrical Engineer from BIT, Mesra, Ranchi, but now a businessman exporting Auto Rubber Parts.

What motivated you to write and who are your favorite authors? What sort of themes do you like to write on?

My daughter was studying in Convent of Jesus and Mary School in Shimla, and we used to frequently go to Shimla to visit our daughter.

During one such trip to Shimla in 1996, I was accompanied by some friends and their families. We were browsing old books stall on mall road of Shimla, and I happened to get hold of a book titled A Profile in Creativity: Poet, Professor, Person: A Festschrift on Som P. Ranchan. On flipping pages we learnt that Poet Ranchan lived at Sanjoli, an outskirt area of Shimla. With a curiosity to see ‘what a poet looks like’, I and my friend decided to give him an unsolicited visit.

We had no idea where Prof Som Ranchan lived, we just had his name. Even though we enquired around the market place, close to the Taxi stand, about his locality, we drew a blank. Dejected at our wild goose chase we were about to give up, when we took a last chance, and as luck would have it asked a young shopkeeper who by chance was his former student and he gratefully guided us to him.

We reached Dr. Som Ranchan’s house and I blurted out that we had come out of curiosity to see how a poet looks like. He was a courteous man, gave us a pleasant smile and sat down to chat with us for almost an hour. I recited a poem titled The Physics Lab that I had written when I was eighteen and my friend Anil Sharma recited several poems, he had penned in Hindi.

Dr. Ranchan encouraged us to keep writing. His motivational aura was so immense that on my return to Agra I penned five poems within a week and posted them to him for approval and editorial corrections/suggestions. He was surprised to receive them at such a short time, he eagerly responded with his editorial expertise after which commenced our Guru-Shishya relationship in full swing from 1996 but which sadly came to an end after his demise in 2014. It was during this span of time that I published three volumes of poetry, Conch Shells and Cowries – published in 1998, Love is a Lot of Work  & A Monument to Pigeons both published in 2013 to critical acclaim.

After publication of my first volume, I have read Linda Goodman and Dr Som Ranchan’s Love Poems for infinite number of days as solemnly as one reads a religious text. Under Dr. Ranchan’s tutelage I was coaxed to read Emily Dickinson, Donne, William Carlos Williams. I sincerely acknowledge with regret that I do not claim to have any particular poet as my favourite.

In essence, critics acclaim me as a love poet, which is my forté, albeit I do write on an assortment of erstwhile and current concerns too. Poetry for me is not content-oriented

How has your life changed from this pandemic? How did you cope during the lockdown?

I am a businessman, and during the first phase of the pandemic, since all business activities were closed, I had nothing to keep me busy. As such, my mind was devoid of business tensions that would otherwise have kept me on tenterhooks. Therefore, I diverted my attention to my literary activities and penned down three volumes of Poetry Books for Children published as Crazy Class, Adventure and Magic Moments along with a set of three other volumes of How to Teach / Learn Poetry Writing tagged with the title, Let’s Crawl, all of which were out in August 2021. Incidentally, the subsequent book, Let’s Walk is still in progression while Let’s Run is in its concluding editorial phase.

Nonetheless, I must accept with deep sorrow that all through the second phase of the pandemic my vision came to a standstill as relatives and dear friends succumbed to the vicious virus, which hampered and blocked my creativity and was therefore unable to utilize my penmanship in a constructive manner.

What are some of the social issues that you care about most?

To be honest, I am not a social reformer by training and temper and have never very seriously pondered over any social issues that I needed to tackle by way of my literary compositions. Yet, my poetic collections definitely highlight some specific social issues which centre around child marriages, dowry, corruption, bonded labour, prostitution, superstition, and relationships besides a host of other disturbing factors leading to divorce and breakups.

If you get a chance to go back in time and change one thing in your life, what would that be?

After doing my Electrical Engineering in 1980, I consider myself fortunate, that I have lived life absolutely on my own terms. I have enjoyed the ups and downs of life because they were solely because of my own decisions and I alone was responsible for them. So, I really do not think, I would want to go back in time and change anything.

I am a keen student, who humbly accepts his mistakes and learns to better himself. At times, I speculate, if I had mastered law instead of engineering, would I have been commercially more successful. However,  no sooner does the deliberation arise than the notion flies away, as being a lawyer I might have raised my financial status and earned a name in the  circle of advocates  but would that have afforded me the time to compose poems and be showered with numerous awards and acclaim in the literary world, both nationally and Internationally. Perhaps not, therefore in truth I am satisfied with my achievements as a poet and have no wish to turn the clock backwards.

What would be your advice for aspiring authors who want to get published?

As a rule of art, aspiring poets should hone their craft and regularly send their poems to journals that publish poetry. In case the editors reject their poems, they must understand that the poems lack certain criteria and hence require revision. Instead of being disheartened, the poet in making must work diligently to perfect his/her talent. They must always remember that they have to work at the grass root level to achieve success in life, whether as a poet or in any other field of their interest.

What are your plans for the future in your literary endeavors?

As a poet, I am very much conscious of the fact that there are certain aspects like prosody and phonetics, which are essential requisites in the art of composing poems, which I have not been able to master yet, since I do not have a literary background. Nonetheless, I am grooming myself and assuredly, I will achieve this mandatory commitment with patience and use the skills in my future writings.

The Teach/Learn Poetry Writing books are being written in the hope that it will enable children to compose poems.  I would also like to mention here that I would soon be publishing my debut novel, which now is in its editorial phase and if well reviewed by critics and the reading public, it would definitely encourage and challenge me to pen more prose.

What are your hobbies and interests outside writing?

I love to listen to music, and in fact, before the pandemic attack I was training in Classical vocal music. Being a businessman, time sometimes can be in short supply, particularly when the available time gets spent in reading the Art and Craft of writing Poetry.

Dear readers, you would by now have known that academically I was a science student, with limited exposure to literature and no knowledge of poetry writing and I have honed my skills in the art of writing poetry by sheer hard work, patience and perseverance.

Remember, practice makes a man perfect and so here I am, with eight published volumes of poetry and three critical volumes written on my poetic works, all of which  I have achieved in the last 25 years. I firmly believe in the precept where there is a will, there is a way and that one can do anything, accomplish anything, if the craving to attain is strong and if one works doggedly to achieve it.

Therefore, concentrate on your weak and strong points; compete with yourself, better yourself in every form of letters and forget what the world says.