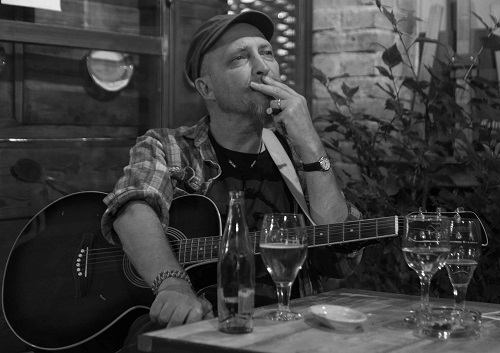 Grae J. Wall is a poet, lomographer and songwriter from St Albans, UK. He has performed regularly at venues and festivals, both at home and around continental Europe.  Besides music and poetry, Grae has also set up a virtual cafe space for poets. His new book of poems will be published on December 7 and is available to pre-order at www.graejwall.com/books

The following are his responses to our questions.

I’m from St Albans (though born in Hackney), a father and a grandfather but still partly a 16 year old punk agitator kicking against the injustice of the world. I am a troubadour, poet, songwriter and lomographer who has performed at venues ranging from Glastonbury Festival to the coolest smallest bar in Barcelona. I like cheap red wine, long train journeys and vintage horror movies. I am a vegetarian and became so in my mid-twenties following an experience of playing songs to a field of cows in Shropshire. I am aware of my contradictory nature – whilst I don’t believe in flags, countries or borders, I still want England to beat Germany in the World Cup!

My first influence was my mum June – a published poet herself. She would submit poems to our local paper often addressing local issues or conflicts and often in response to articles or letters she felt were somewhat uncharitable. Often there was a humour to her poems and she would stand up for the maligned underdog of the situation. Through her I learned that poetry (and art in general) could be an effective and palatable way of challenging and questioning opinion. I didn’t enjoy school very much and encountered some quite abusive teachers so I needed that outlet to express my frustration. To be honest I was also pretty rubbish at all subjects other than English language and literature for which thankfully I had some supportive and inspirational teachers.

As a kid it was Chaucer and Shakespeare  – I loved discovering the naughtiness and double meanings in the text – especially the bawdiness. In my early teens it was David Bowie – I’d felt like an outsider, someone who didn’t really fit in and so I fell in love with this glamorous alien who seemed to be speaking directly to me , the first artist to really do that. When punk broke my world changed – it was Patti Smith, Richard Hell, Joe strummer – not only were these bards shouting at the world with the same intensity I felt but this actually felt like something I could be part of, with my notebook and pen and a second-hand guitar I suddenly felt ready to take on the world. At the same time I was reading Jack Kerouac and Hunter S. Thompson so I guess I started to develop in to a kind of beat-gonzo-punk and that approach has served me well. Along the path there have been so many that have opened my eyes and offered new perspectives from Bukowski to Kurt Cobain, Leonard Cohen to Baudelaire – the common thread I guess is that sense of alienation, the voice of the outsider, that feeling that someone else gets it.

Like my mum I rail against injustice and inequality and I remain an activist and agitator. I look at the world and I don’t understand why everyone doesn’t see that ‘civilisation’ has all gone terribly wrong – it’s broken and needs fixing. I’ve lost too many friends and family too early and as such my work is often touched by the frazzle of anxiety and the shadow of depression. Having said that, sometimes I’ll just write a funny poem about our cat. I’ve been fortunate enough to travel and tour especially around the corners of continental Europe and those travels inspire me – creating, performing and drinking with folks from other countries, breaking down the border walls and burning the flags. I like to think that my words remain optimistic and still retain at times a certain ‘gallows’ humour.

I retreated to my wife’s little summerhouse at the bottom of our garden and recorded a lo-fi album of poems and songs – mouseclubvirusblues (available at www.graejwall.bandcamp.com). I’ve been furloughed from my work as an arts officer and unable to get together with my musical compadres so finding creative outlets was essential – I go stir crazy pretty fast. I found that I was getting quite a lot of online poetry gigs and that they were eliciting a good response, so decided to compile (with the help of my daughter) a new book of poems – The Sound of Revolution which is coming out in December (www.graejwall.com/books ). Alongside all this I’ve continued to try and support other creatives by running the Isolation Arts Cafe group on Facebook which I think has been something of a lifeline for some – providing a space to share art, music and poetry.

It’s very much an intrinsic part of me and how I define myself so it’s quite hard to imagine who I would be without music. In a very tangible way though it has taken me to wild and wonderful bars and festivals all over the world and been the basis on which I have earned a (modest) living. I have struck up life-long friendships (and sometimes collaborations) with wonderful kooky characters, especially in France, Germany and Catalunya. I have had the honour of supporting others on their journey, as a promoter and working with organisations such as Arts Council England, Attitude is Everything and for the last 15 years with St Albans Arts Team. Within those roles I have been able to use music to address issues of access and inequality and truly grasped the transformative nature and potential of music and the wider arts –a humbling journey. Being part of an international community of lo-fi troubadours makes you realise how unimportant the idea of nationality is and how connected we all are – there is a common language in empathy. Some of my favourite moments in life have been playing the after show unplugged set at the bar, putting the world to rights with new found brothers and sisters over an exotic schnapps, a cool bourbon or a farm-fresh calvados.

I believe that offering alternative perspectives and challenging prejudice through a medium can engage and inspire. I think for some, the idea of taking that first step towards becoming actively involved in working towards a fairer, safer and more equitable planet can seem a bit overwhelming and I think music and poetry can offer a gateway in and fuel the passion to speak out against hatred and injustice. That belief was born in my punk days at Rock Against Racism gigs – ‘black and white unite and fight’ – it has shaped me and stayed with me. The wonderful thing about festivals is that they bring people together of all backgrounds and persuasions and illustrate that we can be connected, empathetic and caring – we just need to carry that flame out in to the world. It’s when you listen to the voice of someone who you considered ‘different’ to you and suddenly realise they are not so different after all.

I set up Isolation Arts Cafe along with my colleagues from St Albans Arts Team just as we went in to furlough. I know how important it is for good mental health and wellbeing to have that outlet where we can share creativity and come together in that experience. We wanted a space where everyone felt safe and inspired to share whether it was the first poem they had written, a rekindled love of painting or the music of a seasoned professional. We have hosted regular on-line gigs as well as a live poetry takeover and a haiku challenge. It’s been incredibly well received and followed and I think will continue to be important as we move in to 2021. Some of the postings have been genuinely moving, others funny, thoughtful or quirky. I’ve been surprised at how many folks have been inspired to share their work for the fist time and it’s always so well received which is lovely to see. On a personal level it keeps me connected, inspired and sane!

The world is much smaller than you think and none of us knows for how long we will be here. Create, agitate, educate, organise – the only thing that separates us is fear – reach out your hand and you will find it taken. Countries are a silly and meaningless construct. If you lock yourself in a gated community it is you that becomes the prisoner.