In this interview series where we ask questions to people who are making a difference, it can be big, it can be small, it doesn’t matter, what matters is their contribution to our society. It can be anyone from any walk of life and from any country. Please, do send us suggestions of people whom you think we should interview for this series. 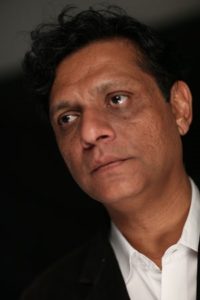 Vihang A Naik is a contemporary poet writing in English, widely published and won many awards. He is educated from The M.S. University of Baroda with Philosophy, English Literature and Indian Literature in English Translations. His collections of poems includes City Times and Other Poems(1993), Making A Poem (2004) and Poetry Manifesto(New & Selected Poems) (2010). His Gujarati collection of poems titled Jeevangeet (Gujarati Poems) (2001) is dedicated to the cause of victims of Gujarat Earthquake. He also translates poetry written in Gujarati language into English including his own Gujarati Language poems into English. His poems have appeared in literary journals and anthologies. His further info can be found at www.vihang.org

I don’t know for precise when I picked up my pen and began to write. But I do remember that I did first write scribbled couple of verse and shared with my friends. It was perhaps, my morning walks during my early years. Say about my ninth grade or so. But it was only during my journeys that also made me write poems.  I think “Love Song of a Journey Man” is one that comes to my mind which I did include first in my first collection of poetry in English City Times and Other Poems which was first published in 1993.  Then my journey in literary field began.

What is the inspiration behind your poems?

It keeps changing. One thing is constant, I do not write until my pen is moved. I am still not comfortable with instant poetry writing.  But certainly I used to write about city life while moving from one city to other. I did travel which exposed to multiple layers of life. I did write as flash poetry.

What’s the social responsibility of poets and writers in your opinion?

I think poets and writers is not directly related to immediate surrounding and environment as they write and use faculty of imagination. Fancy is a words for poets during former times. But when  one thinks to the deeper one realize that it is after all society which supports individual. And poets and writers do have social responsibility in our hostile environment. But at the same time poetry should not be the handmaid of political ideology in the name of social responsibility.

There was a lot of raucous on award wapsi, intolerance and all, do you think this is right or just publicity gimmicks?

Well, award wapsi should be viewed with fresh perspective. It should not be viewed as political motivated individuals. I see when one takes up newspaper that the writer you admired for your whole life who was awarded now only gives up just to strike ones point. It is not a collective political protest. Usually , one would not return ones award. But, you see, it later seems or appeared as collective movement.

Do your ever felt pressured because of something you wrote? Where is the line between freedom of expression and offensive content?

Offensive is relative term. Ones freedom is individual right. But my freedom should not become obstruction or offense of other sentiments.  Throughout the history of India or the World history religion has played role for vital issues in human lives. Where at times books had to be banned in order to preserve order in society. It happens with artist , film makers, poets and writers  when they tend to cross the borders.

How hard is it to get published?

Getting published in our contemporary age is never too hard. I do admire traditional publishers but we not have PoD and ebooks, Kindle formats available where one can publish. Of course, it has become crowded world of words. But I do believe if you have content there is a market available for you. You may have to push a bit, but in the end the journey would be worth it.

What would be your word of advice for aspiring writers and poets?

First of all. Only one advice do not loose faith in yourself. Keep it going. If you have a content or something to put before the world. Remember, there are few writers who have had first book published by traditional publisher. Every one passes through stages. We are in a better stage as compared to previous age as we have freedom of ebooks content creation which can be distributed with ease .

I did really enjoyed and felt honored to have shared my views with you’ll. It is always pleasure talking to you’ll. Do stay with this Indian Periodical. We form healthy opinion.