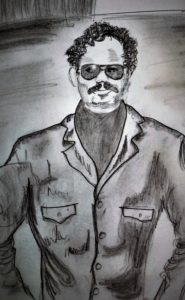 “So our entire unit was deployed” said my father reclining on his chair with a slight smile as he sipped the standard military issue rum.

The anchors of the evening debate were just warming up for the ritual howling. None of us even glanced at the screen though, the TV was of late just switched on as a routine hard to break. My mother was busy in the kitchen with the maid preparing the supper. My sister and I sat in the couch in the TV room (a concept prevalent only in MES quarters), not able to fully comprehend what was just heard.

My father’s daily anecdotes at sundown will definitely be missed the most.  Supposing what he said then was true, Rajiv Gandhi, the Prime Minister of India was advised to wear a bullet proof vest during a politically charged atmosphere. The government of the day did not want to leave any stone unturned regarding the life of the Prime Minister. It was decided that the vest was to be imported from Italy. It would definitely cost an exuberant amount but the life it will protect would justify the price. However, once it arrived the product had to be scrutinized before the Prime Minister could actually wear it.

No civilian organization was credible enough to undertake such a gargantuan task, the stakes were too high. Who better to quality test a bullet proof vest than the Indian Army? The station where my father was posted at the time got designated with the job. The entire thing had become a prestige issue by now for everyone. But the elephant in the room nobody seemed acknowledge was the fact that until that time not many even in the army were acclimated to an apparel that can actually bounce off bullets. Thus nobody had a clue what to do with the thing when it arrived in the army camps. There was no one ready to risk wearing the vest and face firing ammunition from a fellow soldier. The mere thought of explaining to the widows what really happened made the senior officers refrain from giving stern orders.

They can’t just hang the dam thing and shoot at it, the bullet impact registered would not replicate natural scenario hence it would negate the whole process. They came close to consider strapping it to a post and shoot at it but then the idea was rejected when they recalled the Prime Minister was not made of timber.

A Sepoy came up with the idea which eventually even the Station Commander had to agree. Simple as it seemed, it was decided that the bullet proof vest would be put on a stray dog which would be tied safely to the post, a former test subject. If the physical examination of the dog showed no real signs of damage after the completion of the exercise, it would prove that the bullet proof vest works just fine. This was the nearest possible test conditions that could be achieved under the present circumstances.

Consequently the dog, clearly bewildered, was taken to a bath after which it was strapped on with the million dollar bullet proof vest. The Sepoy tried to steady the fanatic dog as he tied it to the post. Men at a distance armed with assault rifle took positions, aimed at the vest and waited for orders to proceed. The Station Commander from his tent at the edge of the training ground gave the nod which was the signal and shots were fired.

Everyone’s eyes near the entire exercise were already focused at the spot where the assault rifles were pointed, the rest of the people in the proximity strained their ears to the shrill burst of shriek by the understandably surprised animal.

When the dust had settled literally, no training received in their entire life, leave alone the Army, could prepare everyone in the training ground for what was being witnessed. There was pin drop silence across the ground, especially in the officer’s tent, everyone seemed to have run out of vocabulary to express their feelings. The Senior Officers sitting in the front lane tried to close their gaping mouth, their eyes welled up as they did and fractious tears broke out. It was a fiasco in its supreme form.

The moment the dog heard the load bang, must have been about the time when it finally decided, “OK, THIS IS IT!!!

I’AM DONE WITH THIS POPPYCOCK

And broke loose and bolted like a lightning towards the unknown wilderness on the out skirts of the training ground, leaving the Indian Armed Forces that boasts of itself as being the biggest “voluntary” army in the planet completely and utterly stumped staring clueless at the post with a broken strand of rope.

It took quite some time before the men regained from the self-induced-coma like state. My father the adjutant of the unit was summoned to devise a strategy ASAP to capture the runaway tyke and seize the bullet proof vest in question.

“So our entire unit was initiated” said my father.

All four companies in the unit were deployed.  Those who were getting ready to leave were stopped, those who returned to their family after the day’s duties were called back. Every soldier in the cantonment were alerted of the situation. Equipped with gears of jungle warfare the men trailed the path the dog took to the wild. Deploying multiple search parties simultaneously, with almost nobody to man the station meant breaking all the norms of the Army, but under the present situation it was the least of their concerns.

Following the days of search the men spotted the dog on multiple occasions but it somehow always managed to escape. They tried stopping it as it scrammed by firing at it, but the bullets did nothing except toss the dog little in the air. It was becoming evidently certain to everyone that Italians were not joking after all, the bullet proof vest did indeed work as advertised.

Meanwhile, all the senior officers in the station were running out of hackneyed fish stories to offer to the repeated calls from Army Headquarters asking for updates on the vest. All deadlines were breached, the scale of panic in the camps grew exponentially with every passing hour. Those unable to cope up with the stress were admitted to the Military Hospital. Apparently it took weeks before the search party could find a vigorously shuddering tired and hungry animal that found a shelter under a dehiscence of a very old tree. The dog got a hero’s welcome when it was brought back to the unit in a 3-ton (lovechild of a Jeep/Jonga and a truck/5 ton). Still very much shaken, the mongrel protested very little when the vest was being retrieved by the men. It finally calmed down when the Sepoy who had handled it initially, arrived with a large packet of glucose biscuit from the unit’s CSD canteen. Eventually the vest was cleaned and restored to its splendor. The officer’s in charge signed reluctantly with trembling hands. Thus the bullet proof vest was certified to be sent to the persona heading the Prime Minister’s security squad.

A sculpture of a mongrel wearing a bullet proof vest sitting upright obediently(a work of fiction, to say the least), was presented to the Colonel of the unit from the Station Headquarters to commemorate the success of the mission. It now is put for display in the trophy room of officer’s mess. There is no text on it, for reasons best left unexplained.

My father now a Colonel nodded with an almost childish grin in his face. My sister’s eyes, and my mouth were wide open in amazement,

“THE DINNER IS GETTING COLD!!!” bellowed my mother from the kitchen.

“Hold on, I’m coming” my father replied back calmly.

He finished his quota for the day, got up and led the way to the dinning table, my sister and I tip toed behind him. We were still taken aback by the entire episode. Not quite amused with the three of us my mother stood by the dining table with a frown.

“Finish your dinner and go to bed, both of you have school tomorrow” she stated.

I was really not sure how, after what I just heard. All of it just seemed too real.

“How was my gasconade?” asked my father.

“What is it this time?” quipped my mother, unlike us she just needed keywords to recollect my father’s stories.

“Papa! Be real, is this one of your cooked up stories like the one about Bhutan? When you said…..” I started.

“Were you even in service during that time?” interrupted my sister.

My mother, sister and I looked towards my father for a definitive answer.

With an unusually content face he simply burst into whooping roars of frantic chortle.

About the Author: George Vivian Paul is a Civil Engineer turned stand-up comedian I predominantly perform shows in Kolkata and Kochi with comedy clubs called The Komedians and Comedified. He stay in Barrackpore with two of his dogs, Jenny and Noah. He dedicated this article to his father Col. Paul Verghese, he served in Indian army. His sketch drawn by George is shown above.