We are starting a new interview series where we ask few questions to people who are making a difference, it can be big, it can be small it doesn’t matter what matters is their contribution to our society. It can be anyone from any walks of life and from any country. Please, do send us suggestions of people whom you think we should interview for this series. 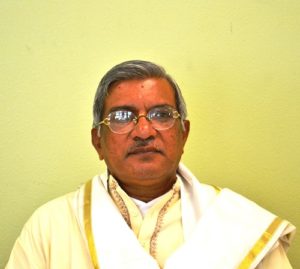 Prof. NV Raguram is a renowned yoga teacher from India. He has trained thousands of people on yoga in countries across the globe. He is founder of Yoga Bharati USA and director at S-VYASA, Bangalore. In recognition for his contribution in spreading the message of yoga the government of India has awarded him with “Yogashree”. His work spans more than three decades following are his views on some of the questions we asked.

I always had an interest in spirituality from an early age. I was always searching for answers but when I went to Bhopal for my engineering studies, I took the opportunity to visit Himalayas several times. There I met a mentor who initiated me in the teachings of yoga.  At my engineering college I started the Vivekananda Club and invited Eknath Ranade, a social leader who oversaw the Vivekananda Rock Memorial and founded Vivekananda Kendra, as a guest speaker. After graduating I went to Kanyakumari to train in Yoga and spiritual sciences. There I learned under a very capable vedantic teacher by the name of Prof. Satyanarayana Shastri. Later on while working as an engineer in Karnataka I opened several Vivekananda Kendras to spread the teachings of Yoga and when I moved to Bangalore we started Yoga Research Foundation which eventually became Swami Vivekananda Yoga Anusandhan Sansthan (S-VYASA).

Patanjali says Yoga is a process to calm down vritis (oscillations) of mind. Vriti also means occupation or job. So mind is engaged in the activity but it has no way to come out. When we quiet the mind we become conscious of ourselves which is our basic nature.

At body level its speed, at mind level its agitation, at intellect level attachment and at emotional level disturbance these are the problems we face. Through yoga calming of mind can be applied to body, prana, mind, intellect and emotion. For body there are Asanas, for Prana there is Pranayama and similarly meditation for mind. The purpose is to become one with consciousness. Krishna says in Bhagvad Gita the one who has mastered the yoga is called “Sthitapragya” which means established in consciousness.

Yoga is vast when it comes to practice. In studios they give like a recipe of few things put together. True and complete yoga will make an attempt at all levels. Body, prana, mind, intellect and emotion then it will be more holistic. Present day lifestyle is filled with tension so yoga should help come out of this. unfortunately many yoga schools give only practices of asanas and some times some kind of breathing practices and call it as pranayama. but they don’t help at all personality levels.

The damages done due to the present day life style full  of tension, are that the health goes away, natural abilities are impaired and there is no clarity in mind and intellect. It’s like we forget the key in our pocket and search it everywhere, we loose harmony in tension. We become restless. Do yoga rightly. Initially join a yoga school, get hands on experience and then practice on your own regularly. It’s just like music, learn from teacher and practice daily.

A friend of mine had hypertension, anxiety, insomnia. He turned to yoga and liked it very much. He joined a two weeks program and understood the ideas behind it, then practiced everyday for ½ to 1 hour. In one month his vital parameters became normal but most importantly his perception to the world changed. He became calmer, more peaceful and didn’t react violently to the world. When you don’t react violently, your body doesn’t produce negative chemicals.

Advance forms of yoga should take towards consciousness. Jnana Yoga, Bhakti yoga not physical postures are the advanced forms. When you are young you can do all asanas but when you are old body doesn’t cooperate. For inner peace and tranquility these advanced forms are needed. Perhaps that is why Sadhus and Sanyasi are named Ananda because they are blissful in themselves though I don’t know how many of them are really satisfied.

To name a few, in a Muslim country like Turkey I have trained about 300 yoga teachers. About eight different cities in Turkey yoga classes are going on, in a German hospital we introduced yoga for neurological problems which is also going pretty well. In a communist country like China, in the city of Guangzhou we introduced yoga and every evening students and teachers there sing bhajans for one hour in order to practice and achieve emotional balance. In US at MD Anderson cancer research center we have two research projects going on which are also going good.